My last post was about cross-training, and this one is too — but a whole different kind.

Early this summer, on one of the first really nice weekends, my husband and I decided to take our bikes to the Jersey Shore and go for a ride. It wouldn’t be the first time we’d wind our way through its oceanfront towns on a two-wheeler. On this particular day, we rode round-trip from Sea Bright to Asbury Park, about 21 miles all told.

It felt so great to be active and outdoors, soaking in the sunshine! And what a range of towns and types of neighborhoods we went through. From palatial homes on acres of land to taffy-colored cottages to the gritty yet hip feel of Asbury Park, the Shore varies greatly.

Midway through our first ride, on June 1

The following weekend, we said, “Let’s do that again!” This time, though, we went round-trip from Asbury Park to Point Pleasant (about 22 miles). Midway, we stopped for lunch at an outdoor eatery, watching boats come and go through the inlet, and just reveled in being outside after what was such a horrible winter.

On the way home, we had a thought: We should try and bike the entire Jersey Shore over the course of the summer. After all, we’d already done two sections. And fitness goals are best broken down into more manageable pieces.

So that became our summer activity goal. We couldn’t wait to spend so much time being active outdoors — and even better, at the Shore.

The following week we did what turned out to be our longest ride: from Point Pleasant Beach to the south end of Island Beach State Park — 45 miles round-trip! On that outing, we saw close-up some of the effects of Hurricane Sandy. Countless times over countless years, I’ve driven along Route 35 and dreamed about living in some of the enormous beachfront homes. In Sandy’s wake, we saw large stretches of nothingness … empty plots of sand where those homes once stood. It was hard to fathom, even with our own eyes. And not much had changed from our last ride along that route, in fall 2013.

When it comes to Island Beach State Park (and if you’ve never gone there, you must — it’s beautiful), we’d driven to the south end but hadn’t bicycled it. It’s 8 miles from the entry gate … and I will confess, it’s a somewhat monotonous slog on a bike! But we did catch a glimpse of a large fox, the biggest I ever saw, before it darted back into the dunes.

The Cape May lighthouse

We celebrated the end of that day’s ride with a giant dish of ice cream — no guilt!

Our next ride, over the July 4th weekend, took us to the southern tip of the state. We rode from Wildwood Crest to Cape May Point, stopping by the Cape May lighthouse for good measure. We’d done that route before; it’s one of our favorites. Cape May is a lovely place to bike. Tally for the day: about 24 miles.

A couple of weeks later, back in the northern reaches of the Shore, we rode about 25 miles round-trip from Long Branch to Sandy Hook. We commemorated that ride with a lighthouse photo as well.

For leg number six, we went south again and rode round-trip from Wildwood Crest to the northern end of Avalon, about 27 miles.

As we racked up the miles and pedaled through so many of the Jersey Shore’s towns, we were able to soak it all in much better than from the window of a car. Sure, we’ve driven pretty much every mile we rode, but the view from a bicycle is much preferred.

The summer was winding down and we had just three sections left to ride. We tried not to think about the calendar turning to fall, nor how we will possibly sustain so much activity over the winter months. I certainly don’t wish to spend 3 or 4 hours on the stationary bike at the gym!

We devoted one day to Long Beach Island. The weather was gloomy … a bit of foreshadowing to fall. But thankfully, not a drop of rain on our 38-mile journey. At the south end of the island, we watched surfers riding the somewhat stormy waves. And at the north end: another lighthouse!

That left two legs, which we decided to do in one weekend. The best part is that we had the most perfect weather imaginable. Day one, the itinerary took us round-trip from the northern end of Avalon through Sea Isle City and Strathmere (quite possibly the narrowest stretch of the whole Shore) to the northern end of Ocean City. There loomed the largest and highest bridge of the whole top-to-bottom Shore route. Originally, I’d intended that we’d do it as part of our last ride. That day, though, we realized that the MS bike ride was in progress, with riders coming over that bridge (between Longport and O.C.). We thought it might make sense to take advantage of the safer conditions — plus we had the energy — so we added the bridge to that day’s ride. That brought our total for the day to about 36 miles.

The bridge between O.C. and Longport

I’m proud to say we both biked up the bridge, coming and going, without stopping or walking our bikes. I definitely chalk that up to the stamina I’ve developed from miles and miles of walking.

We stopped on the Ocean City boardwalk for slices at Manco and Manco Pizza — boy, did that hit the spot!

That left just one final ride, from the north end of Ocean City, through Longport, Margate, Ventnor and Atlantic City, to the tip of Brigantine and back. What a mix of sights and experiences that was. We decided to park by the iconic Lucy the Elephant in Margate and headed north. We were able to do several miles on the boardwalk before it got too crowded. Thankfully, it was late on a Sunday morning, so street traffic wasn’t too bad. We traveled along what we later learned is one of the worst (i.e. drug dealing dangerous) streets in town in our approach to the bridge to Brigantine. (Went a different route on the way back!)

And we were pleased to discover Brigantine. Because it’s an island north of A.C., it’s not a place you pass through on the way to somewhere else. If you’re there, you intend to be (or you’re lost!). At the north end, we found a two-story viewing deck with a sweeping view of grasslands, inlet waters and ocean. I’m sure it’s a somewhat unknown spot!

As the day grew later, we made our way back to Lucy. Top of my mind was the thought: If you’re going to “Do AC,” don’t do it on a bike! Atlantic City is not bicycle friendly — no shoulders in many parts of town, lots of traffic and buses and shuttles to contend with. But it was really the lone negative in a summer of so many positives. Late in the afternoon, we circled back to Lucy, totaling about 31 miles for the day. And after having the ocean in our sights for the entire weekend, we made a beeline to the water’s edge, for a ceremonial and celebratory dip.

Our nine days of biking the Jersey Shore were so rewarding, so motivating, so enjoyable. Not only did we reap the endorphins of exercise but also the joy of being active in beautiful weather in the midst of lovely scenery.

Bicycling is a terrific form of cross training — it’s great cardiovascular exercise, plus it helps strengthen your legs. And you don’t have to do 20 or 30 miles in a ride. Even 30 minutes, or 8 to 10 miles at a nice steady speed, can fulfill the recommended daily amount of aerobic exercise.

Oh, and the title to this post? That’s the rough sum of all the miles we rode this summer. I’ll be the one with the icepack on my butt. 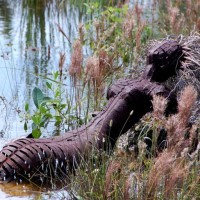 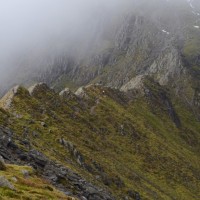